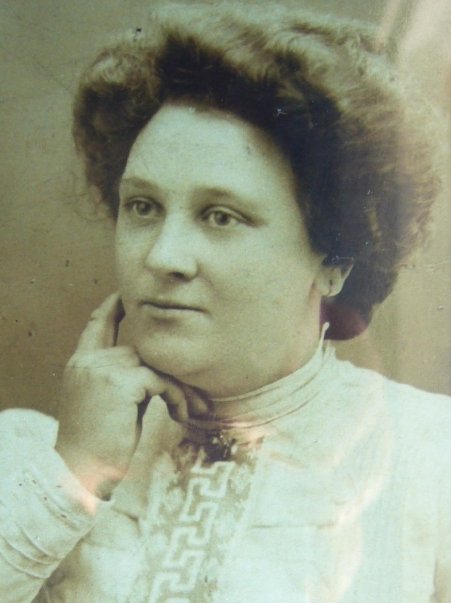 I never knew my paternal grandmother. She died of pneumonia when my father was eight. He didn’t really tell me much about her until later in his life, so it wasn’t until I was already in my late thirties that I discovered she was Jewish. For some reason that had been kept a secret within the family. That’s so often how it is with families – by the time it gets to you the original reasons for secrets and ancient grudges and broken alliances are all lost in the murky mists of time and forgetfulness. There is very little on record about who my grandmother was. The photograph I have is the only one that was ever taken of her, as far as I know, and I didn’t see it until my father began to talk about her, and describe who she was for him. He was the youngest child in a large family, and her death had a profound effect on him which resonated throughout his life. One of his older sisters was married with a daughter about his age, and when their mother died she took over the task of parenting him, as their father could only cope with his brother Dick who was about a year older than him. I think my father lost touch with his deepest identity at that point, and spent the rest of his life trying to rediscover it. He spoke of his mother as a kind and gentle woman, who was often unwell. Because of an accident when she was much younger she only had one functioning lung, so it’s not surprising that pneumonia saw her off eventually. My father told me that when he was a boy she used to talk about heaven as a place in the sky, high above the clouds, and that after she died he used to imagine that she was there, transformed into one of the twinkling stars he could see at night – always looking down on him, and although remote reassuringly still within the universe. That must have given him great comfort, although by the time I was born he had revised his belief system somewhat and turned instead to a more humanistic atheism. I somehow always knew without having been told about his lack of extended mothering, because I sensed the Abandoned Lost Boy in him – a projection I brought with assiduous regularity to most of my intimate relationships in adult life. When the photograph of my absent grandmother eventually emerged from wherever it had lain hidden for so many years, I searched in her image for something recognisable, something I could glean about her character and relate to. I could see in her features the genetic inheritance I carried and had passed on to my children and grandchildren. It’s true that we always find what we are looking for, and perhaps if I hadn’t known the family connection it wouldn’t have seemed so obvious. Although that pose I see in her photograph is uncannily like the one my father so often struck when he was ruminating over something, and I realise that, quite unconsciously, I do it too. I tried to imagine what it must have been like to be her, to live in the age she did when being a Jewess married to a Protestant of Irish descent was something not to shout about, to bear all those children and manage a family in what nowadays would have been considered poverty, to be physically compromised in a time when there was no National Health Service and far less understanding about how to avoid and survive diseases that so frequently turned out to be fatal. I contrasted my non-relationship with her with the one I had enjoyed with my maternal grandmother, which was rich with intimacy, laughter and affection right up to her death at the age of 86, and for the first time I appreciated what I had missed. And yet… we carry our parents and grandparents within us, not simply in our genes, but in what has been introjected from our relationship with them. So I’m wondering whether she is like the dark side of my moon, the unknown aspect of the feminine, the part that is secret, hidden away, loaded with so many untold stories, struggling to survive and doomed to death by drowning. But of course she is also the part that continues to shine her tiny light in the fathomless dark of the night sky, promising the reassurance of eternity.