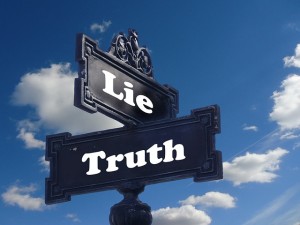 “I liked your blog post,” My daughter said. “The one about onions. But you weren’t entirely honest, were you?”

“I wasn’t? I made reference to the less than golden childhood – wasn’t that honest enough?”

“Not that,” she said. “All that stuff about lasagnes. You didn’t admit to cooking us fish fingers and baked beans a lot of the time. It was hardly a gourmet diet we were on. Although the cake bit was correct – except it was gingerbread, not flapjack, I used to trade for someone else’s tuna, sweetcorn and mayonnaise sandwiches.”

She was right. I had never been exactly innovative on the sandwich front.

“Anyway,” she went on, as ever infinitely forgiving about the past. “What’s your next blog going to be about?”

Truth has been a pervasive theme throughout my life. When I was a child lying was synonymous with betrayal of a mysterious code laid down in a history that preceded mine. There were an awful lot of rules that simply had to be obeyed, and questioning them wasn’t really much of an option. My mother convinced me that she could read my mind and knew my every wrongful intention, and it took some years before I realised that was about as factual as the tooth fairy. As a ploy for keeping me in line it worked pretty well, however, although I wouldn’t recommend it as a skilful parenting strategy.

As a result of this, perhaps, (or maybe just another part of the inescapable genetic blueprint) I reached adulthood with a passion for truth-telling and truth-seeking. I also, somewhat naively, assumed that everyone else shared it. It took even more years before I realised that the rest of the world hadn’t been trained according to the often baffling family code that had been my birthright. Truth and trust are so bound up for me that I struggle to regain trust in someone if they lie to me. Respect and trust are so bound up for me that if I can’t trust someone then I lose respect for them. Sorry, but that’s just how it is.

On the other hand, much like my daughter, I am infinitely forgiving, so if I’ve lost respect and trust for someone then I work very hard within myself to rebuild it. Loss of respect is one of the near enemies of love, and I feel deeply uncomfortable keeping anyone out of my heart. After all, judgement kicks aside compassion, and one small lie is so often not so much a moral lapse as a face saver or an attempt to sugar an unpalatable pill of truth. And even big lies may carry with them a whole dossier of justifications. We can be just as evasive with ourselves as with other people.

I know this because I have been guilty of telling lies myself. Sometimes tiny social ones to avoid hurting someone’s feelings or to sidestep a clash of opinions that can only lead to unnecessary drama (see what I mean about justifications? We’re really good at them.) But at certain times, throughout my life, I have told whopping great lies, slippery lies of omission, left hand not admitting to right hand what it’s doing kind of lies. Not often, and never without the agony of lingering guilt, but nevertheless, since I’m being honest now… might as well fess up. So at those times, the whole loss of trust and respect thing has turned me against me. It’s an interesting process, rebuilding bridges between parts of your ambivalent self.

Truth, as I’ve observed over and again, is something of a shape-shifter. My truth is not necessarily your truth. There are times when this can become an issue, times when it’s better to let it go. If I allow your truth to take precedence over my truth, and in doing so compromise my integrity, then I am betraying my true self. If your version of events and mine don’t tally simply because we were standing at different places and saw different things, then I can go along with that. But if you tell me that what I saw was not what I saw, and insist that the only correct perspective is yours, then my self-belief is swallowed by the black hole of your certainty, and I am lost. This is one of the fundamental elements that constitute abuse, when your lie causes me to doubt the reality of my own experience. Those are the worst lies, in my book – the ones that mess with someone else’s head in the service of another person dodging the consequences of their actions.

We are strange creatures, us human beings – supposedly the top of the tree of evolution, but I definitely doubt it. We have way to go yet for our spirituality to catch up with the complex depravities of our self-interested nature. We lie to ourselves and each other about our motives and values and collude with the vast industry of untruth that is advertising, because our ego says more and better even though our heart may be sickened and our soul has curled up in despair. We know how to lie, and so we do. We begin as early as the moment that we recognise that your brain and my brain are capable of holding differing realities.

We love trickery, and we like being fooled – as long as it’s all a game and everyone agrees the rules. When the stage magician saws the lady in half we squeal with horror, because we know it’s an illusion and we’re buying into it. It’s one of those circumstances where we love having the wool pulled over our eyes. But when you say you love me and you mean “for now” and I believe “forever” is that a lie you’re telling me, or one I’m telling myself? If we agree to believe a lie one of us is telling is that sometimes a necessary collusion? We see the flaws in one another and blink to make them disappear, hoping it works both ways. If we promise one thing and deliver another, does that constitute a lie, or is it simply our innate capacity for raising expectations we can’t fulfil?

I am wary of anyone who says they are 100% reliable, or 100% anything. And don’t get me started on that 110% thing. That’s worthy of a whole blog post to itself. So when it comes to The Truth I tend to be cautious. That sounds like a dead end to me, or something that’s been neatly fitted into a conveniently portable box. I have always been curious. You show me a box and I’ll want to take the lid off to discover what’s inside. Like Alice in Wonderland, sometimes I believe in as many as six impossible things before breakfast. Especially now I have facebook and twitter to keep me abreast of the news.

What I have found is that although certain things feel true, I can only with any real certainty say that they are true for me. That love is the glue that holds the universe together feels like truth, but maybe it’s only the glue that holds me together. Once the world was definitely flat, now it’s definitely roundish – who knows whether any of this is real anyway? Black holes and Multiverse theory and quantum physics have inspired, confused and awed me. We live in exciting times. Mysteries abound. Not least, for me, is how does any of this amazing technology work? I don’t even know how my body works. And my brain, or anyone’s brain… do scientists actually understand much of what’s going on there yet?

So I remain appropriately humble on the subject of Truth. I respect yours, and will always be fascinated by how you arrived at the beliefs you’ve come to espouse. Did you unpick the truths you were offered on a plate as a child? Did you examine them and re-examine them and only accept them when you found evidence to back them up? Did you commit to the truths embedded in one particular political party or religion because it made sense with your head or resonated with the feeling in your heart or your gut? Do you stand by the truth you believe in to the extent that you refuse to acknowledge any additional data that might cause you to question it? Are you grounded enough in what you think to be true that you can say with confidence: “I know” rather than “I believe”?

I know that I am here in this moment, and that you – whoever you are – are there in your own private bubble of selfness. This much is true. As far as I can tell. But the ultimate truth of who ‘I’ am, and ‘you’ are is open to conjecture.