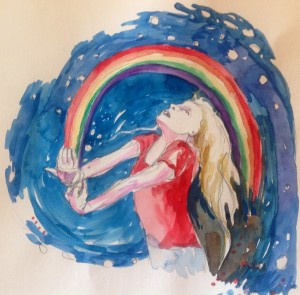 When I first wrote ‘Tiptoes the Elf’ many moons ago, I wrote it primarily with a heart full of love and gratitude for my children, who show up as Moonfish and Sunram in the story. Little did I know that all these years later the story would still be spreading its magic and connecting me with wide awake elves all over the world. I put it on my blog because I wanted to share it rather than sell it. I’m an old hippie at heart and I still believe that love is something you give away for free. Not everyone knows how to receive love, which saddens me, but most of us are immediately touched by the innocence of children and remember somewhere inside us the joy it brings. I met Sylva Fae in this virtual cyber world (which often seems remarkably like fairyland to me) when she contacted me after reading the Tiptoes story. She said she was curious to know what happened next. She is a writer skilled at creating bedtime stories for her own children, so I suggested she invent the next chapter. And the wonderful story that follows is hers…

Alice was a lonely child. You’d think living in a busy flat, people packed in on every floor, she would have plenty of friends but Alice had none. She had a mum and dad who loved her but they were always just a little too busy to play the way Alice wanted to play. Alice craved companionship. She’d had a friend once, a long time ago but Alice couldn’t remember why they left or where they went. The memory eluded her yet sometimes when she would draw chalk rainbows on the flags in the little backyard outside the flat, a hazy tingle of a distant memory would almost surface; a fraction of a name or a swirl and flash of colour but nobody ever mentioned her friend and slowly Alice began to believe she’d imagined him.

Through all of her loneliness, Alice was most content escaping to her secret space, a small concrete yard enclosed by huge ivy covered walls. In the corner where the broken flags hadn’t been replaced was a small patch of dirt. This was Alice’s garden. She nurtured the straggly weeds that struggled to survive in the shade of the giant wall. Each visit she carried small cups of water down the three flights of stairs, careful to not spill a drop of the precious water. Occasionally she’d plant seeds but nothing really grew. It was here Alice would sit and dream about what lay beyond the wall, a princess’ castle, a fairy village or an enchanted forest. The characters of her musings became her friends.

One gloriously sunny day, Alice, cups in hand, wandered down to wild flower garden. She bent to water her flowers and stopped in dismay. The delicate pink and white weeds had withered and curled in the hot sun, their leaves lying brown and crisp on the dry earth. Alice kicked at the dust in frustration. She knew it was futile but it felt good to take out her anger on the useless soil that had failed her flowers. Feeling the tension leave her body she gave one last kick. As the dust rose up around her something glinted from the soil. Alice poked it with her toe and a rainbow of light sparkled in the grey. Kneeling down her eager fingers dug the rest of it out and wiped it clean on the bottom of her T-shirt. She ran her fingers down the smooth crystal of a broken prism.

Delighted she turned her treasure round and round in the sunlight marvelling at the dancing beams darting round the drab yard and transforming the grey into a rainbow of light. As she spun and twirled something inside her stirred, that familiar tingle when she tried to remember her lost friend surfaced and warmness spread from her heart right to the fingertips clutching the prism. Alice soon stopped wondering what the strange feeling was and lost herself in the magical moment. Soon though it was time to go back, she hung the prism from a woody ivy branch so it could spread its magic over her dead garden. If she couldn’t have flowers, she would at least have a rainbow garden. 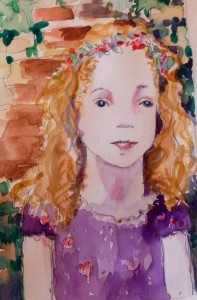 As Alice slept that night something was awakening within her, that drowsy slow awakening where it really didn’t remember going to sleep or even how long it had been asleep. Three floors below in the little yard the prism, gently swinging in the breeze was soaking up the silver moonlight. Shimmers of rainbow moonbeams reached up to Alice’s bare window and caressed her sleeping form. Her gently rising chest warmed and tingled rejuvenating the sleepy elf inside. Ever so slowly the realisation of his self and his purpose came back to Tiptoes. He was here for Alice, to be her friend and guardian and maybe add in a little mischief when things were getting boring. Tiptoes listened in on Alice’s dreams saddened by her longing to find a friend and recognising that incomplete feeling lodged deep in her young soul. Tiptoes vowed to find a way to help her though he wasn’t sure how; after all, what could he do other than cast rainbows?

The next day Alice rose feeling amazing. Something had changed within her and she no longer felt quite so melancholy or alone. She peeped out of the window and stared in amazement at the flash of colour in the corner of the little yard below. Eager to get down there she grabbed the nearest clothes and ran down the three flights of stairs. Her eyes had not deceived her. The brown, curled weeds of yesterday stood proud, fresh green leaves weighed down with dewdrops and beautiful dainty flowers adorned every stem. The prism’s rainbow rays kissed the delicate petals of each one till they glowed with iridescent light.

Tiptoes smiled as he felt the spirits of the lonely little girl soar. Kneeling in the new rich soil, Alice stroked each flower in her amazing magical garden revelling in their beauty. But after a while she leaned back against the wall and closed her eyes, her shoulders dropped and a single tear made its way down her cheek. What good was it to have a beautiful garden if you have nobody to share it with? That single sad thought encompassed her and her little body shook with silent sobs. Tiptoes called out to her to reassure her she was not alone any longer but her grief had closed off her mind to the little voice she held so dear just a few years previously. Alice made her way back to the flat, tired and dejected she crawled back into bed and pulled the covers over her head.

The next day she was awakened by something, but what? She knew she should remember what it was but it was like trying to find a shiny coin at the bottom of a cloudy pond. She did know, or rather felt, that the familiar tingle in her chest was getting more insistent. Swinging her legs out of bed she felt drawn once again to the window. Her flowers were still there but that didn’t seem to be what the tingle was trying to show her. Alice pulled on her T-shirt and shorts and skipped down the stairs to the yard.

Inside of Alice, Tiptoes was also building with excitement like he was about to be given the most special gift. He had no idea why he was feeling this but the same pull that was drawing Alice had its grip on him too.

Once outside Alice breathed in the cool morning air; the sun was just lazily spreading its rays and the prism sent them darting around the small space. Tiptoes reached out to the rainbow sparkles sending his own rainbow out to join with them. The air around became charged, Alice shivered and goose bumps rose on her arms. Something was about to happen. Something magical.

To her amazement the tiny coloured rays rolled out a path in front of her, beckoning her to follow. Alice took a few tentative steps, Tiptoes willing her on, the strange tingle became an urgent buzz like a whole bag of popping candy exploding in her tummy, forcing Alice forward to the ivy covered wall. Not knowing why she was doing it she put out her hands and entwined her fingers in the ivy stems. First gently separating them then prising them roughly apart as she realised with glee there was a hole hidden behind the thick bushy vines. At last she would see what was on the other side of the wall. Would it be a castle, a forest, a cave full of sleeping dragons? The draw in Tiptoes was also escalating, he could feel her elation and understand her joy at having the mystery of the giant wall almost in her grasp but he felt he had a different purpose here. 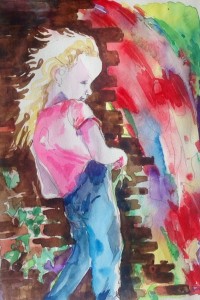 Soon the hole was big enough to stick her head through. Alice took a deep breath and savoured the moment of excitement. She was just about to kneel down and peep through when a noise on the other side startled her. Alice jumped back tumbling over. As she lay on the ground the rustling noise started again.

‘Hello,’ a friendly voice called through the hole. ‘Is someone there?’
‘M m me,’ stuttered Alice to the invisible owner of the voice.
‘We just moved in next door. Do you want to be our friend?’ said the voice.

Alice rolled forward onto her knees and slowly crawled to the hole. She’d dreamed of many things on the other side of the wall but other children? She took another deep breath, poked her head through the hole and wriggled her shoulders through the twiggy hole. The ivy bows gave and Alice tumbled at the feet of a rather grubby little boy with the widest grin. Behind him a little girl shyly held out a paper bag of sweets. Alice stood up and beamed at her new friends.

Tiptoes’ heart swelled with joy at her elation but there was something else. The pull strengthened as Alice moved towards the two children and the stirrings of realisation took seed in his soul. He felt complete once more as he recognised the sleeping elves. Could it really be? His rainbow heart glowed and reached out to his beloved siblings…

You can read more about Sylva Fae, and follow her on Facebook at www.facebook.com/SylvaFae where she will be shortly announcing the inauguration of her blog. You can also follow her at @SylvaFae on twitter. This is a writer I will be following with great interest. Her mother, the accomplished artist Christine Southworth created the beautiful water colour pictures for the story.