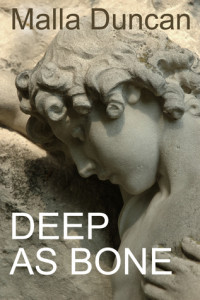 In the very first sentence: “The girl made him uneasy…” Malla Duncan sets the scene for the whole of her novel, ‘Deep as Bone’. Who exactly is this girl? We spend the rest of the book discovering the answer to this conundrum. The book is a cleverly crafted and beautifully written jigsaw puzzle of clues that eventually fit together in the way that most gratifies a reader – it is so satisfying to feel you have solved the riddle single-handedly without any unduly obvious interference from the writer!

Anyone who enjoys the music of language will delight in the way her narrative flows. Malla Duncan is an expert at imagery, bringing vividly alive both the backdrop of deceptively peaceful rural England and that of the sheep farm in the Karoo, where the novel’s narrator, Ilse, was born. This desert in South Africa she eloquently describes as a place where “time is a component of the landscape, branded in stone, sculpted by the wind…”

Time is a significant factor in the book – throughout it we are taken back into teasing glimpses of Ilse’s enigmatic past, which strangely mirror events that transpire in the present. We are given hints about a tragedy – a back story that unfolds in parallel with a more recent secret history within the family in which Ilse has become so intimately involved.

Ilse is a complex, intriguing character, and we see everything through her eyes – but can we entirely trust her take on things? I found myself at times suspicious of each of the major characters – all of whom are skilfully drawn. There is death at the dark heart of the story – as we continue to read we realise increasingly that the 5 year old child, Amy is haunted and disturbed with good reason. She has been the unwilling witness to something traumatic that happened before she had the language to describe it, and its horror wakes her every time her missing aunt Clare is mentioned.

Ilse, who has arrived to take on the job as Amy’s governess, seems to be the only adult who really understands her and relates to her – seeing reflected in this troubled child her own distressing, lonely childhood. We feel sympathy for them both as Ilse sets out to find the cause for Amy’s nightmares. What is it she has seen? What does she know?

Like me, you will read on with increasing fascination as the story takes you on a journey into Ilse’s mind as well as following her quest to dig deep enough to find the truth. To the very end, you will remain uncertain as to how things will turn out. And the revelatory denouement will finally make sense of the chilling beginning as the last few pieces fall into place.

When I began reading ‘Deep as Bone’ I recognised elements of Gothic fiction, and was reminded of Jane Eyre – the dark mansion, the house of secrets, the handsome husband who has lost one wife and is in thrall to her successor, the coldly resentful Melissa. But as I continued reading I found that this was not fiction that belonged to any particular genre, nor does it need to. It is literary psychological fiction at its best, worth every one of the 5 stars I have given it. I will be reading more of Malla Duncan’s novels, all of which can be found on kindle at Amazon.

Malla was born and still lives in Cape Town, although she usually sets her novels in England. She writes mainly women’s psychological murder mystery suspense thrillers, about real women characters who find themselves in tricky situations, often with their lives at stake. If you like pace, non-formulaic writing, and some quite chilling stuff, her books are for you.