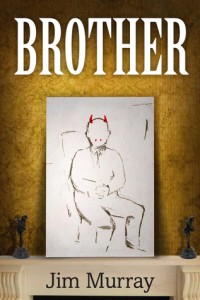 There are some books that cause me a real pang of regret as I approach the inevitable ending, knowing my relationship with the characters will soon be over. This is how I felt about ‘Brother’, although conversely I was so gripped by it that I had to continue reading the final tantalising chapters in one sitting. I finished it with tears in my eyes… although I’m not going to tell you why. I wouldn’t want to spoil your pleasure. Jim Murray had me hooked from the first few paragraphs, and his narrative kept on reeling me in, chapter after enthralling chapter.

The story line is deceptively simple – or appears to be at the start. Gradually we discover increasingly more of Dominic’s complicated sibling bond with his brother Spencer. Intrinsic to the story is the background to the ongoing feud between the brothers, and Dominic’s perception of Spencer as being the almost demonic changeling baby who burst his childhood Eden bubble and created all the family dysfunction that ensued. Of course in life, as in this novel, nothing is quite so straightforward. Many of Dominic’s perceptions are challenged and altered during the course of the book, as circumstances force him to reflect on the true picture of the past, as well as his various relationships, and the reasons for his own dysfunction.

Who are the real monsters in this novel? As I read on they kept emerging, or seeming to, only to be vindicated or displaced by others. I found myself wondering at one point: was it Dominic who was the real monster? Could he possibly be so out of touch with himself? I was intrigued by his strangely submissive response to the bully Mangan, who reappears like a hungry ghost from the dark vault of his boyhood and intimidates, entraps and manipulates him in adulthood, with dire consequences. This oddly compelling connection between them creates the pivotal thrust of the narrative. I found myself squirming as I read the later chapters, reminded of pantomimes where the audience shouts as the villain appears on stage: “Look out behind you!” The frustrated tension built up as Dominic remained almost willingly blinded by his prejudices and near trancelike acceptance of Mangan’s terrorizing tactics.

I never want to tell too much of the story when I write a review. For me, the quality of the writing and the depth of characterisation are what makes or breaks my enjoyment of a novel, however great the story line might be. Jim Murray is a superb story-teller – that much is a given. But what makes the book a 5* triumph for me is far more than that. His characters, made flesh by the interplay and dialogue between them, have a solid reality to them that made me feel I would recognise them if I met them, and know them deeply. He has a skill for deftly painting their portraits, layer upon layer, so that as a reader you come to understand them in the way that you do your friends: as rounded, utterly believable human beings. His psychological insights are offered with a light, almost invisible touch, which makes their impact all the more profound.

But what delighted me beyond all this was the beauty of Jim Murray’s language, his adroit use of simile and imagery throughout. I made some notes as I read, capturing some of my favourites on the wing:

Jim Murray does not flinch from describing bad pennies in all their atrocious, unquenchable behaviour – but he also manages to evoke a degree of sympathy for them, without ever becoming sentimental. In ‘Brother’ he has skilfully woven an epic tapestry out of those traits we least like to own: jealousy, betrayal, murderous hatred – yet ultimately this is a book about love, which in real life is never an easy ride. I recommend this novel wholeheartedly, and I am confident that I’ll enjoy his new one, ‘Double Ugly’, just as much.

You can find out more about Jim Murray and both his books at his Amazon Author page: http://www.amazon.com/Jim-Murray/e/B00CLOUMGK