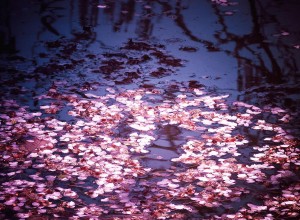 Today, as I was walking home, the fragile sunlight dissolved into sudden gentle rain, and I was overwhelmed by an inexplicable emotion that was something like joy, something like grief, the most peculiar happiness. And then I understood. It was one of those Proust’s madeleine moments that took me back to the first time I went to Glastonbury with the love of my life. We had been together for a year and a day and we went there to celebrate, for our own private handfasting.

It was spring, just like now, soon after the solstice, and we were so irreparably entwined with one another, so terribly, disastrously in love, with a twinly rapport that has only come once in this lifetime. We had booked the room – in a crazy place run by a mad woman (not that we knew that before we went) – that turned out to be in an annexe out in the garden. As she unlocked the door and we stood on the threshold, a sudden flurry of wind blew most of the blossom from the tree just outside. It gusted on to the floor, and across the bed – a breathtaking show of pink and white confetti that couldn’t have been better orchestrated if anyone had tried.

“It does that once a year,” she said airily. “Today is the day.”

Glastonbury is that kind of place. Magic is everywhere. Later, as we walked towards the town it began to rain, just like today, and we got soaked to the skin and had to go into a charity shop to buy dry clothes. In retrospect it seems symbolic, though at the time it was simply part of the glorious adventure that was our whole relationship. Why symbolic? Because there are times in your life when you shed a skin you didn’t even know you were wearing; a suit of clothes like a cocoon out of which your fragile new self can delicately emerge, somewhat damply, to dry in the sun. I do love a metaphor.

We kept going back to Glastonbury, all the years we were together. It pulled us towards it with a weird kind of magnetism. It was the place where our love sometimes found its most intense expression, even when we were unhappy together, much later on. Somebody who lived there told us once it acted as a portal; and that every time you visited, as you left you passed through into a new alternative version of your life. A sojourn in Glastonbury for any length of time makes such proclamations seem plausible.

Here, on the far distant shore of those islands of magical resonance, it seems a sweet delusion that in our innocence we readily believed that each portal would take us to a deeper place of shared connection. Portals are not that predictable. In a time of flux and transition in your life, they are just as likely to open the way to further turmoil. Sometimes that leads to the realisation that it’s time to move on, rather than keep repeating the same story you tell yourself about who you are.

It’s strange, to be drawn back again so powerfully into remembering the love of my life, the way we were, the beautiful folly of our love at the beginning. How could anyone be so completely full of joy without it spilling over into an ocean of bliss? We were blissful; we were wild with delight like children let out of the classroom to play. We were shocked by us, by the sheer improbability and yet inevitability of our having found one another. How could it be so easy to fall so deeply in love without drowning?

Neither of us had needed Glastonbury to provide a place to cross over into an alternative version of our self. We had both already gone through that first portal of transition. That day we met we were ready for change, for challenge, for the heady risk of a truly soulful relationship. It’s how it is in life – you imagine the possibility of something and then it arrives on your doorstep with the absurd power still to surprise you. Be careful what you wish for.

My memory of our love and its loss still lies on my chest with a sorrow deeper than any sigh could hope to relieve. Although, paradoxically, it also gives me the sweetest happiness, remembering how happy we were and how deeply we connected, when we did. We have been apart now for more years than we were together. There is a point at which you stop saying to yourself that you miss someone, and you just accept that that was then and this is now. And in a strange way, they are also always part of now; in that place inside you where they always were and never go away.