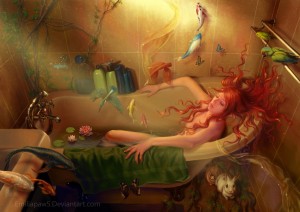 I’ve said it before, and I’m sure I’ll say it again (at least, I hope I do) – this process of writing a novel is a curious business. It takes me ever deeper into a strange, and yet strangely familiar, landscape. I remember years ago meeting a friend, another writer, who had just spent three years locked within the enclosed monastery walls of her work in progress, emerging apologetically to discover which of her friends had not abandoned her. “I’ve been quite mad,” she said. “I’ve been driven insane with it. The bloody thing won’t let me go. Day and night it’s taken me over, and now I hate it.” I read her novel, and it was an innocuous enough tome, if rather bulkier than it needed to be. I felt for her. Appearances can be deceptive, and I knew all too well that feeling as though the novel and all its characters have taken on a life of their own and don’t spare one ounce of sympathy for what they demand of you.

This time, like every time I begin something new, I felt confident that I would keep my head above water. It was a comedy of manners I was writing, after all. Where could be the harm in that? I already knew how the story would go (or I thought I did) and I had the measure of the characters. I would maintain a sense of proportion, I thought. There would be no midnight burning of the metaphoric oil as I peered at the glowing blue and white screen as if scrying into a crystal ball for an undiscovered future. There would be no waking at dawn with the next chapter already written in my head, urgently propelling me towards the computer. I wouldn’t find myself stopped in my tracks by some revelatory comment one of the characters whispered in my ear, usually at the most inopportune moment. I would work to a schedule. I would be disciplined. I would continue with the rest of my life just as if I wasn’t mentally chained to the rock I had to carry every day to the top of inspiration’s mountain.

For a while this seemed to be successful. I managed to get three-quarters of the way through the first draft still feeling buoyant. I was getting to know the people in my novel, beginning to understand them. They had moved from being caricatures to becoming real – much like Pinocchio, who changes from wooden puppet to actual boy by virtue of developing a conscience and learning to tell the truth. As soon as the people in my novels start to tell me their truth the hardest part of the process begins. From then on, I feel their pain, I hear their life story (whether or not it ends up on the page) and I can no longer manipulate them to do or say what I think they should. They achieve an integrity that is beyond the role I ascribed to them. If they are good, they are never entirely good. If they are bad, there is always some explanation for their flaw, even if it remains unspoken. I don’t write everything I know about them, but I do need to know it.

What began with my tongue in my cheek had by now morphed into a story that had grave implications. I had become the witness rather than the creator, and all I could do was record with as much honesty as possible the tale that unfolded under their direction. Of course, this is all madness, as my friend so many years ago described. In those far off days we didn’t have the luxury of cutting and pasting on the computer. Any cutting and pasting to be done was quite literal, littering my study floor at times with random scraps of paper. Rewrites took a small forest’s worth of typing paper and ate up three times as many hours as it takes us now. It was quite possible in those days to shut yourself off from friends and family and lock yourself away like Shakespeare, confined to a garret until the work was finished. There was no social media demanding attention and flirting with your concentration to distract you. You could go as mad as you liked, and no one would particular notice. If you were lucky you had someone in your life to keep you fed and change your sheets once in a while. It’s all different now.

So, I had escaped the worst of the madness, more or less. I still had one foot on the floor. But then I realised the ending I’d envisaged simply wasn’t going to work. The people in my novel just weren’t prepared to play along with it. They had their own ideas about how it should go. I persevered. I bowed to their greater wisdom. I finally managed to get to the end of the first draft. (They were right. The alternative ending was so much better.) I breathed a sigh of relief. Just another four or five edits and I’d be done. And then, instead of the full-blown spell of madness, the illness began. Something I’ve had reason to observe over the years is how much I somatise emotional pain. As a therapist I never learned the skill of protecting myself enough. I am too empathic. (Could there be such a thing? Yes, when it means you can’t empty the sponge with which you’ve soaked up other people’s angst.) It turns out the same is true when I’m immersed in writing a novel. No wonder I skippity hopped my way through writing short stories years ago, avoiding the worst of it. I feel their anguish, those people I imagined I invented. Well, strange and uncomfortable though it is to contemplate in some cases, they are each of them an aspect of me, so it’s not surprising.

Anyway, if anyone has noticed my absence in this vast empty cinema of blogland, that’s where I have been for the last couple of months. My five meticulous edits took place under a heavy blanket of virus protection (something of an irony in this computer age.) I am referring to an actual virus, one that attacked my body and rendered me mostly mute and immobile for much of the time, with just enough energy to tend to my novel and read all the books I wanted, sustained by the undemanding warmth of friendship and a commitment to be kind to myself.

This past week I have at long last felt my old familiar self returning, and I realised the people in my novel are finally letting me go. I’m taking tentative steps back into social media, and hoping – as my writer friend did, all those years ago – that in the meanwhile I haven’t been forgotten, and my lack of participation has been forgiven. Those of you struggling to keep all the balls up in the air while writing, while managing a work/life balance, while keeping up a social life, while reassuring a partner you are still there for them, while living with pain and illness, while maintaining some degree of equilibrium even when the kids are driving you crazy… well, hopefully you’ll understand.