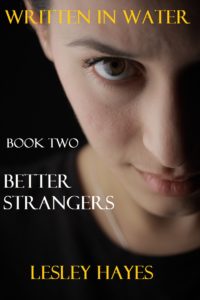 I always forget the sinking anti-climax that inevitably follows the end of writing a novel, until there I am, suddenly back in it, temporarily submerged and resting on the quiet ocean floor beneath the surging waters of creativity. All the edits are done, the preparation for publication is completed… there’s nothing left to say… and an echoing silence from my central characters as they disappear back into the darkness of infinite possibility, their stories told for now. Why such emptiness left in their wake? It’s not as though I’ve killed them off. Cordelia, Beatrice and Rosalind were still very much alive as I finished the last chapter, and will emerge again in Book Three of the Written in Water trilogy.

Perhaps it’s because at the point I left them, 1990 had already heralded the beginning of a new era, and the end of the Thatcher years. Optimism had once again reared its often naïve head, just as it had in the nineteen-sixties. The three women in the trilogy were by then already two years into their forties, and more sure of themselves and what they wanted from life. I remember being that age. I remember my own optimism. It was in many ways the best time of my life – a time when I made different choices and began to understand the meaning of true empowerment. But that necessitated letting go not just of the 1980’s, but everything that had gone along with them for me. Apart from my children, that is – although they were each fast moving towards their own adulthood and my relationship with them adapted accordingly.

The thirty years since then have gone far too fast. Perhaps as far as my characters are concerned, I am already feeling a backwards flowing grief for my final farewell with them at the end of the third book of the trilogy. I know something of the journey they will each make during those years – not every detail, because there are always unexpected diversions and surprises as their stories reveal themselves to me. But enough to know that each of them, like me, will have difficult choices to make at times, regrets and challenges to balance the unexpected joys. Growing up is never easy. Growing old can only be staved off by denial for so long.

When I embarked on this trilogy it was similar to whenever I’ve begun a love affair. I had no idea just how deeply I would fall in love with them, or how much they would get under my skin, these girls who became women and whose destiny is to grow old along with me. Just as it has been with my children, I can’t choose one of them to be my favourite. Sometimes I become more involved with one, but then another one will move into the foreground, and so they become my focus. I am gripped by the nuances of their emotions and where their choices lead them. Cordelia, Beatrice and Rosalind each have such different histories and personalities, and are all so exquisitely flawed (just like everyone with whom I’ve ever fallen in love, and, of course, me.)

A conundrum that fascinates me is whether we are as free as we like to believe, or whether our strengths, weaknesses and preferences are set in a mould by our genes, early childhood experiences and cultural background. Is that mould plastic enough to be reshaped or broken by later experiences in life, or are we doomed to go on repeating mistakes from a perspective that we adopted in a time even before memory, and mostly out of our awareness? And for that matter, can our later experiences heal the damage we experienced when we were too young to escape the consequences? When I meet my characters at the start of writing a novel, these are the questions that I ask, and I come to know far more about their histories than ever reaches the page, because hidden there are the clues that go on informing their decisions. I don’t believe we are entirely doomed. I couldn’t have worked all those years as a psychotherapist if I did. There are always opportunities for reparation, for healing, for coming up for air and taking a broader view. I always hope my characters will find them.

The lives of Cordelia, Beatrice and Rosalind are still work in progress – just as it is for all of us. I hope you become as intrigued as I am to discover what happens to them next…

Strange Eventful History (Book Three) will be published in 2020.

And follow my blog on The Lesley Hayes Blog