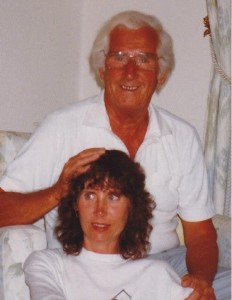 This Sunday is Father’s Day in the UK, and ever since my father died in 2004 it has been a day that brings up mixed feelings for me. And for the last ten years, each time it comes around, I think what it might be like for others who have lost a father, one way or another, or never had one they knew and felt loved by to begin with.

My son once referred to such specially marked out occasions as “Hallmark Opportunities” and I admired his refusal to be dragged headlong into a morass of mawkish sentimentality. He has a point, although I realise that for many people having an opening to express their thanks in a card is welcome. Not all of us find it easy to write what we feel or are lucky enough to have the convergence of right time and right place that makes it possible to tell someone how much they mean to us. I’m not against the sending of cards per se or the marking of one significant day assigned to a particular relationship. It’s just that when that person is no longer around or never manifested in your life in your good way, it’s painful to be reminded of the loss. Not everyone has had a positive experience of being fathered. For some the celebratory hype around the day may feel like salt being rubbed into an already gaping wound.

I was fortunate, in that I had a long and incrementally empowering relationship with my father. When I was forty I realised that I’d only ever had a semi-detached relationship with him, always overshadowed by my relationship with my mother. It was one of those grasping the nettle moments in my life, and I determined to know him and have him know me. The years that followed were deeply enriching for us both, so that when he eventually died it felt our relationship was equal and complete.

The first year after his death I wrote him a letter, just as if he had travelled to a far distant country where no other communication was possible. In it I described how it had been for all of us since he had gone, and how I had discovered inside me all the gifts he had left behind. I hadn’t realised before how much like him I was, and what a blessing that had turned out to be. That first year I also went out and bought a Father’s Day card. I wrote in it, but didn’t post it. There was nowhere it could be posted.

That was the part that hurt the most – the realisation that there would be no more chances to tell him and show him how much I loved and appreciated who he was. It wasn’t that I hadn’t already done that, only that when it comes to love there is always more and it goes on growing, and we need to put it somewhere outside of us so we can see how beautiful it is.

I feel so sad for anyone who has lost their father way too soon, without the opportunities to know him that I had, or who look at other people’s fathers and wish they had been able to have that experience of being fathered well. Absent fathers, abusive fathers, controlling fathers, avoidant fathers – fathers who say, as mine used to: “I’ll fetch your mother,” whenever you ring up – they all in their way shape who we are and how we see ourselves in relation to the world. We each have to come to terms with our relationship with our father, whether or not he is in our life.

This year, as every year since 2004, I see the cards in the shops and the advertisements urging me to make the day special, and even receive promotional emails telling me what amazing gifts I can get, and I am torn between insult and injury. How tactless, I think, to remind me of my sacred duty as a consumer to buy more stuff to mark the occasion. But then I let it go. I have learned to let a lot of things go, because life is short and there isn’t enough energy to spare that’s worth spilling over what’s unimportant.

My father had a stroke the week before he died, which made his speech difficult to understand. Nevertheless, he fought with his usual quietly indomitable spirit to regain what he could and make himself understood. The last time I saw him conscious he was being fed by my mother in the hospital, and he started laughing at the absurdity of it. We stood around him, joining in. His laughter was always so infectious. And then he said: “This is all that matters – laughter, family, love.” That’s what I’ll be remembering on Father’s Day.

(This poem, written in February 2007, was a long time in gestation – a tribute to my father who died in August, 2004. He was my teacher, my fellow-traveller, and my friend…)

“Where are you?”
is a question I have been asking you
from that final day I urged you onward,
your outspread wings broken by such suffering.
I never said: “Don’t leave me…”
or “What will become of me without you?”
The answer to that has unfolded in the creased cotton
of the winding sheets that since have wrapped around me.
In one of those last conversations your blue eyes
snatched at my heart with the same old tender complicity,
cradling me with your courage, even as you were dying:
“Don’t be frightened…” you said…
Were you frightened? Was there a moment
between the last breath and the no-breath
when you teetered awestruck on the brink of everness
remembering parachutes that didn’t open,
wondering whether yours would after all?
Once you held me high on your shoulders
bounding along with your young man’s stride
the safest place in all creation and me
younger than words but laughing as the world
rocked and bounced beneath me.
You were such an immovable presence in my universe.
Many years later when I was grieving
for all the unlived life and unmet love,
tears leaching the fractured rock of my protected heart,
you held me as I wept, your chest a citadel,
and said: “I know that place. I’ve been there too.”
You were frightened that time we climbed the mountain,
and it was my turn then to be the guide for you,
leading you towards your joyful peak experience,
your happiness a song inside my heart.
It was only after you left I needed to ask the dark sky,
the empty room, the silence of your remembered voice:
“Where are you now?”
Was it you who answered me that night
unknown hands tucked me round with an invisible blanket
so gentle it was like a consecration?
Were you letting me know that you had safely landed?