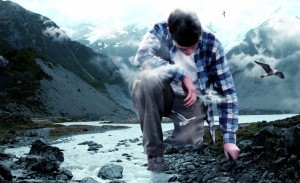 This Sunday in England it is Father’s Day – a tradition that was begun in America 100 years ago. My father will have been dead for eleven years this year. It seems impossible that so much time has passed. It goes by faster all the time. As I get older I appreciate increasingly the poignancy of life’s ephemeral quality. Now you see it, now you don’t. So you have to make sure you are noticing as much of it as you can while you’re here. Sometimes I fear that there won’t be enough time to do everything I need to do before I go, or say everything I need to say to those I love. For many years now I’ve done my best to keep up to date with them for that reason. 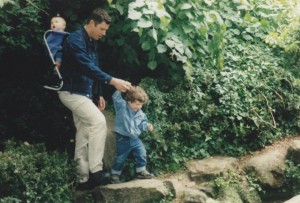 This year I’ve been thinking not so much about my father as my son, Jason. He is father to three gorgeous boys: Alex, Angus and Archie. They are all quite stunning looking lads, much like my son, and now all three of them are bright, funny, articulate teenagers with a great sense of humour. Jason is a good father, a fact I’ve had plenty of time now to observe. He is firm when required and a friend to them when it matters. He is good at setting boundaries and being flexible when that looks like a better option. He is kind, but not sentimental. He gives them plenty of attention and boundless opportunities for physical play and mental exercise when they are with him. He also makes sure they develop their innate skills and keeps a watchful eye on their education. They are lucky boys. They will never know, as Jason had to, what it is like to grow up without a dad. 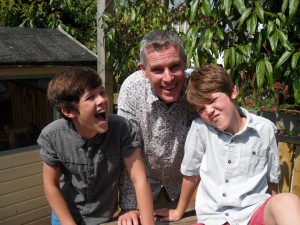 I admire my son for having managed to work out what’s required of a father without ever having had a healthy model for what that is beyond the age of four. He had my father, his granddad, there in the background, which was some kind of saving grace, and for several years a temporary stepfather who unfortunately provided little in the way of understanding a boy’s emotional needs. Nevertheless, my beautiful, sensitive son somehow survived unscathed, just about, his formative years and adolescence, and became increasingly a lovely, kind, generous and thoughtful man, who would probably laugh off this much praise and ask why I didn’t mention his dark side. It’s not that I don’t know he has one. It’s enough for me to know that he knows about it. There’s nothing worse than someone who is denial about their dark side. Trust me, I know.

One of the things that has seemed for many years to symbolise a precious aspect of my son’s personality is an object he bought as a present for me at a School Bazaar, when he was about thirteen. It’s a smooth, round stone, big enough to fit into my palm and heavy enough to use as a paperweight. It was painted and varnished, and in all the years since then the colours have hardly faded. It shows a picture of Snoopy as Scout Leader leading a couple of Woodstock scouts, with the words inscribed: “All right troops, follow me!” It brought tears to my eyes when he first gave it to me, and has every time I’ve thought of it or looked at it since. For me it revealed how much he had already taken on the mantle of adult male, prepared to take care of his mother and sister and show them the way out of the darkening woods. 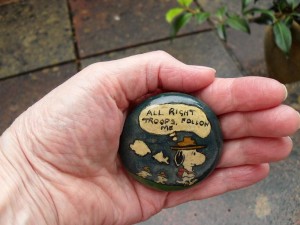 Whenever I’ve mentioned it to Jason he’s said: “No, it was just that you were really into Snoopy, and I guessed you’d like it. Nothing deeper than that!” But I’m his mum and a psychotherapist to boot, so perhaps I’m bound to read too much into it – or maybe it’s enough that what I see is true for me. Symbolism is in the eye of the beholder when it comes down to it. But I know what a brilliant support he was to me then and has continued to be, especially in so many practical ways, and with a wonderful skill for lighting up a room with his laughter and optimism. One time a few years ago when we were all going out for a meal as a family, he led us across the street from the restaurant as we walked back to the centre of town to get the bus. We all automatically followed him, chatting away as we went, but then I asked him why he’d crossed the road when he did, as the bus stop was on the side where we were originally. “It was sunny over here,” he said. “Why walk in the shade when you can choose not to?” It’s that kind of remark that makes me realise how wise he is, and how fortunate his boys are to have him as a role model.

Another significant memory I have of my son is of an occasion about ten years ago, on the beach at Brighton. I was collecting stones for my garden to take back with me to Oxford, and every so often he would hand me one, and it was always perfectly in tune with what I wanted. Eventually I said to him: “How come each time you give me the stones that are exactly right?” He shrugged and said: “Well, it was easy. I noticed what you were scanning for, and then filtered for them.” I hadn’t known consciously which stones I was searching for, but he’d observed me closely enough to work it out. I’ve watched him since, and seen how he does that with everyone. He is quick and smart, altruistic and considerate – a great combination. He has developed as a person, in all the ways that matter, and all the ways I’d hoped for him when he was born, and he reminds me of my father more and more. As the years go by my respect for him grows – as a man, and as a friend. And today I’ll be thinking of him with love, as I always do every day, celebrating him as a father, too. 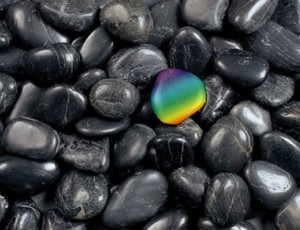