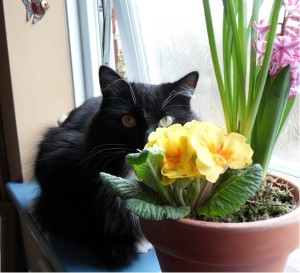 If you remember, in my last post I mentioned an intrepid mouse that narrowly escaped death by cat. As it turned out, it didn’t perish after all. I waited almost a week for the tell-tale odour to indicate its passing, and meanwhile cleared up the remains of several more ‘gifts’ from Yoni that hadn’t fared so well. Emailing details of this to a friend she replied: “We had 15 dead birds in our house over the last year, and a blood bath on the carpet – got the carpet cleaner in and two days later on the same spot found another half dead blackbird, with blood and feathers all over the place.” As you can imagine, reading these gory details made me feel so much better.

I started to wonder whether Yoni has some form of Attention Deficit Disorder (along with all the other adverse personality traits) that causes him to be so easily distracted. He’s not really a dedicated assassin, more like a playful clumsy boy with instincts he hasn’t entirely mastered yet. This charitable interpretation of his behaviour is the basis for my continual forgiveness anyway. He isn’t really a murderer, is he? There’s nothing remotely personal in it. He just takes the game a bit too far sometimes. Well, always, if I’m honest.

And then the morning came when I opened the kitchen cupboard under the sink and saw a trail of mouse droppings weaving a path through the multiplicity of cleaning materials, there mostly for decorative purposes since I rarely clean anything. This was the golden opportunity for that cupboard to get cleaned, even though I dreaded finding a small corpse at the back of it. How can one person accumulate such a huge variety of spray containers of stuff for cleaning every conceivable surface? And when did I ever realistically believe I would want to polish stainless steel or add extra whitening to my washing load?

I followed the track of the mouse as I removed every item, using one of the sprays to disinfect as I went. Finally I came across a half chewed J-cloth and a tiny sieve (why did I ever get that? What would I even use it for?) filled to the brim with mouse droppings. Ah, finally it had been assigned a purpose! That intrigued me. Had it been designated a latrine for some arcane reason best known to the mouse, or was it simply the right size for the job? And the chewed J-cloth just broke my heart. Was it that desperate for food? Or was it building a nest? Suddenly my propensity for anthropomorphism kicked in and I started to over-empathise and worry about the mouse. I visualised it, isolated from its family, hiding out under the kitchen cupboards, subsisting on dust and J-cloths, pining for the water-logged fields from whence it had been dragged. I began to think of it as plucky and resourceful, making the best out of a bad situation, much like Anne Frank in Amsterdam during the Second World War.

I was relieved when the entire cupboard had been laid bare to find nothing but the vast amount of droppings as evidence of the mouse’s sojourn there. Perhaps she (by now it was definitely a ‘she’) had escaped somehow through an unseen hole under the sink unit and found her way back to her real home? I could but hope. The following morning I opened the cupboard again to take out the washing up liquid (I’m not an entire slob) and saw more droppings. She hadn’t escaped, then. Good on her, I thought, although I was a tad irritated by the need to clean up after her again. Then I opened the drawer under the sink to get out a tea-towel (I’m reasonably domesticated in some areas) and there she was…

We stared at one another, transfixed, for one of those breathless nanoseconds where you wait for your fight, flight or freeze mechanism to remind you of the animal you really are, and then she opted for flight, while I froze. Too late, I pulled the drawer wide and called out: “Anne! It’s ok! I’m here to rescue you!” She had already leapt from the back of the drawer down into the murky depths of the underworld beneath the sink. Yoni, meanwhile, was sleeping on the sofa, in that enviously profound state of unconsciousness that cats do so well. The mouse had looked suspiciously well fed, and I wondered whether it wasn’t just the cat down the road who was as usual blatantly stealing food from my boy’s bowl, but perhaps the mouse who had also developed a liking for it. Anything had to be an improvement on J-cloths, after all.

As the days passed, Anne and I developed an intuitive rapport. I would cautiously open the drawer with my mouse rescue kit at the ready and find a fresh pile of droppings decorously placed at the front. There was soap in the back of the drawer and I realised on seeing the tooth marks and shavings that Anne was desperate enough to survive on it. I felt racked with guilt. This mouse had set up home amid the squalor of my kitchen cupboard (admittedly remarkably much cleaner now) and I couldn’t even offer her a decent meal. I couldn’t bear to think of her starving, but I couldn’t possibly set a trap for her… or could I? I went out and bought a humane trap, designed to lure the mouse inside and then keep it there before being escorted back to the wild. Excitedly, I cleared the drawer of everything but this, and waited.

The next morning I discovered that Anne was cannier than I had realised. In spite of the ingenuity of the trap, which was weighted in such a way that a mouse stepping on to the feeding platform automatically caused the door to shut, she had got in, eaten the food, and dashed out again. I decided to seduce her with tasty morsels, and possibly fatten her up enough to slow her down. As the days went by this became our ritual. I primed the trap initially with cheese, then after some research found it’s actually not good for mice and peanut better would be preferable. Twice every day I laid the bait. Twice every day Anne exchanged it for healthy looking droppings in a corner of the drawer. I never actually saw her face to face again, but her calling card was evidence enough.

After a week of this I’d resigned myself to the fact that I actually had a pet mouse I kept in a kitchen drawer. I felt embarrassed. This had to be resolved. I went out and bought another humane trap. I tried to think myself inside the mind of a mouse. It’s hard enough with humans. At least there I have some clues in my own thought patterns and behaviour. This time I primed both traps with dollops of irresistible peanut butter. Surely one of them would work? I tried to imagine the frame of mind a mouse might be in with a full belly and an insatiable desire for derring-do. Would she risk the second trap just because she could? “Go girl!” I cheered her on in my own mind, almost believing that by now we had telepathic contact. (All right, I agree – I really should get out more.)

In the morning I opened the drawer as usual. There was always a moment’s frisson of expectation, so far each time dashed. I checked the first trap and once again it was resoundingly empty. One stray dropping fell out of it as I picked it up. Sighing, I lifted up the second trap and noticed a faint suggestion of heaviness. I gently shook it, and there was definitely something inside. However, I’d been fooled a couple of times like this before and been disappointed. Imagination is a deceptive magician well practised in raising false hopes. I carefully carried the trap out of the kitchen and into the garden, shutting the door behind me to keep Yoni well out of the way. Gingerly, I placed the trap close to the ground and raised the closed flap at the front. Nothing happened. I crouched down, lifted it to eye level, and began to look inside – but at that same moment the mouse leapt from the trap, bounded across the flower bed and through the fence to the precarious future beyond.

Not even a glance over her shoulder. Not one gesture of thanks or regret. I think I may have shed a little tear as I went back inside to disinfect the drawer for one last time. I would miss her.

One thought on “Yoni’s mouse”